After ten years in the music industry 'AM' starts its publishing company. The first catalogue is called Apparel Book and the first issue is ‘Apparel Music B-Day10’ which collects ten years of the brand in more than 350 pages, available in paper and digital format. The book retraces AM’s path with music, images, illustrations and collaborations with artists from all over the world. You'll be able to listen to all the records (via Spotify) using the QR codes on the book's images.

In the special occasion of our 10th birthday we felt we had to create something really memorable, bringing together in two vinyl some of the most influential artists who took part in the making of our history and some new ones, yet prominent and successful, to the family.

All of them had a fascinating mission to accomplish honouring the concept of ‘Jazzy’ which is the notion and approach set ten years ago as the fundament of Apparel Music and we can plainly say that they’ve won the challenge, brightly, producing eight stunning tracks which represent an ideal declination of the requirements you need to enter the AM family. The roster of artists behind this record perfectly represents the international soul of the label and very much speaks for itself, from our head honcho Kisk to ‘The Voice’ Robert Owens, our longtime family members Ivano Tetelepta & Eugène Latumeten, the Swedish Salary Boy, the great Tuccillo with his recognisable style, the American Fred P who’s music is the best introduction of his abilities and needs no further presentation, to the young gun Chevals with his bright talent. The final side then is the debut’s side with the iconic Art Of Tones who’s career as a pioneer of dance music speaks for itself and last but not least the marvellous duo Marcel Vogel & Tim Jules, also new to the AM family, who’s baptism fulfills our high expectations. A list of virtuosos worth an All-Star Game! Finally a very special and important mention for the artist and friend of the AM’s clan Marco Fantini, a true visionary who blessed us with the chance of choosing amongst some of his stunning artworks for the covers of the record. Each production, indeed, has a different and dedicated piece that reflects the mood of the track. Thanks Marco for having such an important role in this creative process!

The opening track is “Your Face” by Kisk & the supreme and unrivalled voice of Robert Owens, with a bunch of great musicians who took part in the creative process: the Cuban Gendrickson Mena (trumpet, Saxhorn), Max Laganà (Bass) and Nate Lotz who recorded some grooves on the drums. In A1 resides the concept of “Jazzy”: the dialogue between man and machine which is still, in the modern era, the perfect equation to produce music. Starting from some old, dusty samples here’s surely one for the records, fully embodying Kisk’s approach to music production.

A2 is “Hearme” provided by Tuccillo. The Neapolitan born but Spanish adopted is a veteran of the Apparel Music’s family, that’s why we’re so happy to have him leaving his mark once again on a special occasion like this Bday. His track perfectly epitomises his sensuality, profoundness and sensitivity as a producer, being capable of expressing through his music some of the distinctive characteristics that AM aims to communicate. The Deep soul of Fred P comes out in all its strength in his track “From The Other” kicking off the B-side. We're delighted to have the American producer on board for this B-Day vinyl as his first appearance on AM leaves no doubt about his huge talent as a music maker, while B2 is an Ivano Tetelepta & Eugène Latumeten’s affair with “Where Have You Been?” and we’re overjoyed to greet again the pair who’s back on the label with a really special production. The dreamy pads and the punchy rhythm section helped by the smooth vocals are yet again the logotype of the Dutch duo. 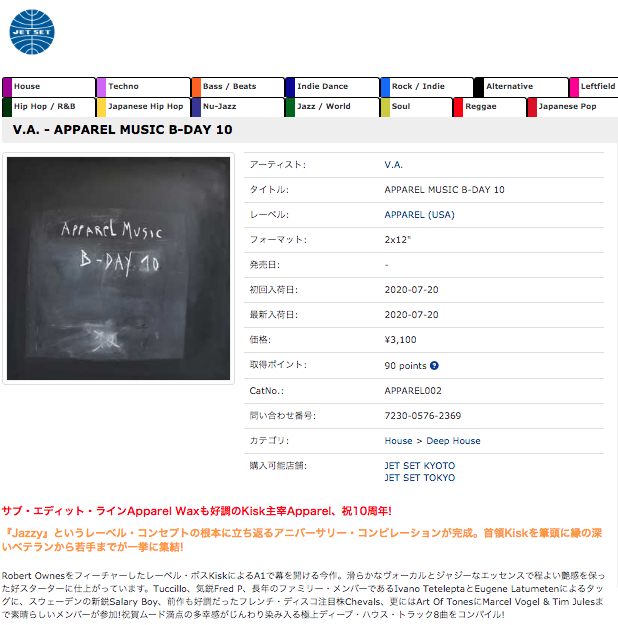 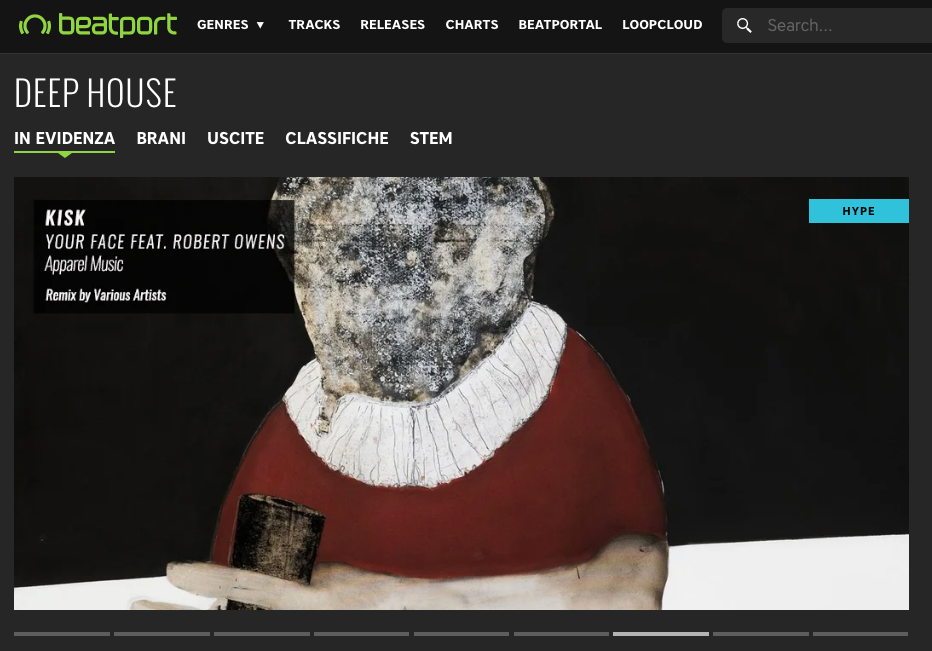 The second vinyl begins with Salary Boy and his “Piano House”. The London based Swede's production is the perfect way to start the C side with its classic yet modern touch. Another gem to add to the collection. Chevals then takes over in C2 with “All I Wanna Do Is Love You” and we’re so happy to see a skilled guy like him being recognised in the music business, as sometimes a label's purpose is just to be the perfect filter of someone else's visions. His track is another tangible example of his qualities.

Then, to kick off the D side we got Art Of Tones with “Never Sleep”, a fabulous funky groove with a compulsive rhythmical attitude where the Parisian house icon displays his musical genius in a track genuinely crafted to fit the mood of the Apparel 10th birthday. We’re really proud and happy to have a guy like Ludovic Llorca on board for this project as he showed since the very first contacts a pure will to join our gang making all his sound expertise available for us. A special occasion for a special debut on AM for the Frenchman! Is up to Marcel Vogel & Tim Jules to complete the masterpiece with the last brushstroke which is an experimental and modern tribal beat with masterly arranged keys and superb percussions. The sound research of this track is quite astonishing and, in its whole, is what may be the loop you’d play over and over again to open or close a mesmerising DJ set!

Finally a very special and important mention for the artist and friend of the AM’s clan Marco Fantini, a true visionary who blessed us with the chance of choosing amongst some of his stunning artworks for the covers of the record. Each production, indeed, has a different such an important role in this creative process!